HISTORY OF THE ABBEY

1184: foundation of the abbey, necropolis of the Rohan family

According to legend, over 800 years ago, on the edge of Quénécan forest, where the rivers Blavet and Daoulas meet, Viscount Alan III de Rohan fell asleep in the valley following an exhausting hunt.

He was plunged in a deep slumber when the Virgin appeared to him in a dream, urging him to build at that very spot his eternal resting place.

Guided by these words and by his ambition to extend the power and glory of the Rohans, the Viscount and his wife Constance, Duchess of Brittany, drew up the deed of foundation of the abbey, appropriately named “Notre-Dame-de-Bon-Repos”, on 23rd June 1184.

On this same day, an abbot and twelve Cistercian monks took possession of the place.

Renowned for their farming knowledge and their land-clearing practices, these monks increased the value of the land to match the economic ambitions of the Rohans.

The site was indeed well chosen with its plentiful natural resources, wood and water being particularly abundant. 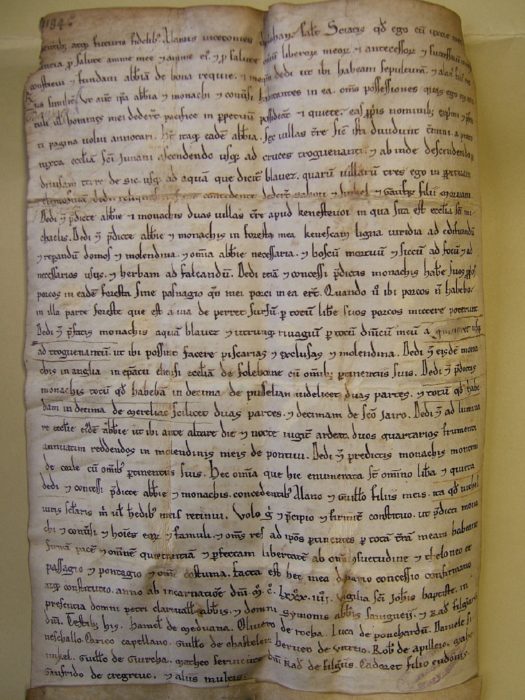 Deed of foundation of the abbey

The monks’ management of the land was so remarkable that very soon, lacking in number, they called upon lay brothers, opening up the first granges in 1235 in Caurel.

The escalation of this management finally required a lease system, known as a “domaine congéable”, to be implemented (wage workers, land tenancy, etc.), giving rise to economic prosperity and a “feudal” situation for the monks and their abbot.

Far removed from their primary vocation (vows of obedience, chastity and poverty), this remarkable growth led to a slow decline.

In 1491, Duchess Anne of Brittany married the King of France Charles VIII. Bon-Repos became a “royal” abbey… much to its misfortune!

In 1516, Francis I, King of France, introduced the notorious commendatory system.

The successive abbots of Bon-Repos were henceforth appointed by the king. They did not dwell at the abbey and designated a prior to “manage” the abbey… yet enjoyed its considerable revenues!

18th century: the revival of Bon-Repos

It was not until 1683, with the arrival of the new abbot Philippe Alexandre Montault Navaille de Saint-Geniès, that a spark of hope was rekindled at Bon-Repos.

He dreamed of a life of luxury, and decided to rebuild “Bon-Repos” to make it into his abbatial palace.

It took thirty years of hard labour to reconstruct the abbey and make it worthy of a “worldly aristocrat”, infatuated with current fashions. 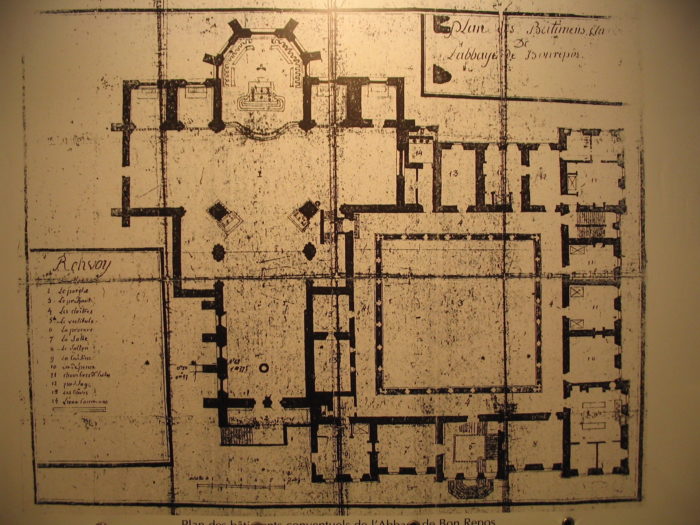 19th century: the downfall of Bon-Repos

The French Revolution of 1789 sounded the death knell for Bon-Repos.

In 1791, the abbey was sold at auction as national property.

The domestic buildings were purchased by a citizen named Julien Le Bris, to accommodate a linen shirt factory. In 1795, the abbey was pillaged by the Chouans who regularly occupied it until 1800.

In 1832, the labourers constructing the Nantes–Brest canal were the last to shelter in the buildings whose walls were still standing.

Neglected and battered, the great abbey of the Rohans fell dormant for over 150 years.

But… did it disappear for evermore?

This is where an extraordinary human adventure began.

“They did not know it was impossible so they did it!” Mark Twain.